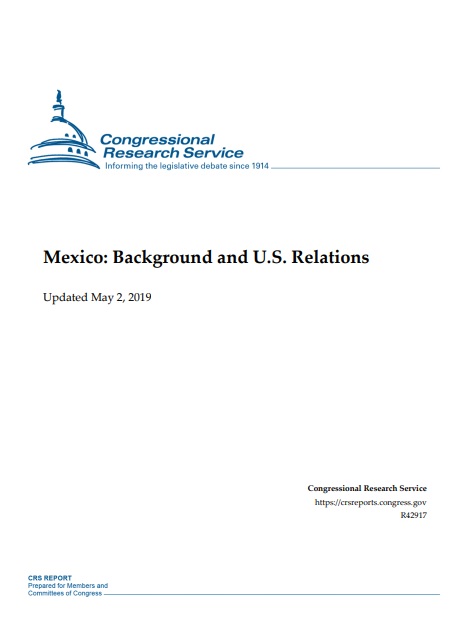 Congress has maintained significant interest in Mexico, an ally and top trade partner. In recent decades, U.S.-Mexican relations have grown closer through cooperative management of the 2,000-mile border, the North American Free Trade Agreement (NAFTA), and security and rule of law cooperation under the Mérida Initiative. Relations have been tested, however, by President Donald J. Trump’s shifts in U.S. immigration and trade policies.

On December 1, 2018, Andrés Manuel López Obrador, the leftist populist leader of the National Regeneration Movement (MORENA) party, which he created in 2014, took office for a six-year term after winning 53% of votes in the July 1, 2018, presidential election. Elected on an anticorruption platform, López Obrador is the first Mexican president in over two decades to enjoy majorities in both chambers of Congress. López Obrador succeeded Enrique Peña Nieto of the Institutional Revolutionary Party (PRI). From 2013-2014, Peña Nieto shepherded reforms through the Mexican Congress, including one that opened Mexico’s energy sector to foreign investment. He struggled, however, to address human rights abuses, insecurity, and corruption.

President López Obrador has pledged to make Mexico a more just and peaceful society, but also to govern with austerity. Given fiscal constraints and rising insecurity, observers question whether his goals are attainable. López Obrador aims to build infrastructure in southern Mexico, revive the state oil company, promote social programs, and maintain a noninterventionist position in foreign affairs, including the crisis in Venezuela. His power is constrained, however, by MORENA’s lack of a two-thirds majority in Congress, which he would need to enact constitutional reforms or to roll back reforms. Non-MORENA governors have also opposed some of his policies. Still, as of April 2019, López Obrador had an approval rating of 78%.